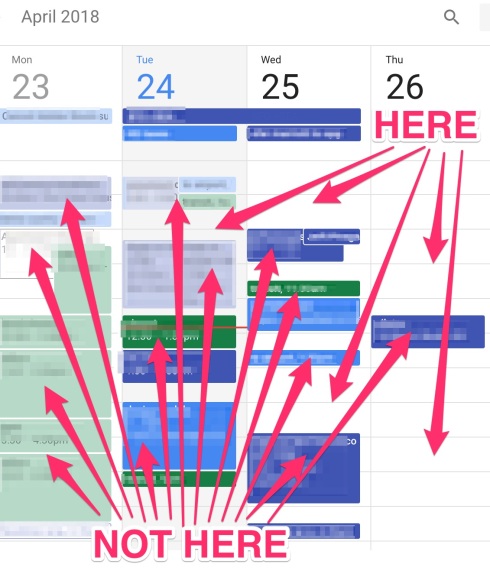 David Allen, the creator of Getting Things Done, classifies all work into three types of work: 1) pre-defined work (the stuff on your to-do list, like drafting a document, buying diapers, finding an apartment, etc.), 2) ad-hoc work (unexpected stuff that shows up needs to be dealt with immediately, like finding a plumber after the bathroom floods, or dealing with a livesite issue), and 3) defining work (figuring out what needs to be done — which is where your pre-defined work comes from).

All three kinds of work require one thing, though: time. All work requires time. Specifically, free, uncommitted time — in the calendar above, the blank spaces are where the work happens, not the filled-in spaces. Time is the currency you spend to move an item from “to do” to “finished.” (Even if you delegate it, someone, somewhere, spends time to complete it). Move enough of those items to “finished,” and you find yourself crossing the finish line: the novel finished, the album released, the product launched, the degree earned.

If you find yourself wanting to get more done in a day, there are really only two options: 1) Reduce the time cost of each task (i.e. be more efficient), or 2) Increase the amount of time you have to spend (i.e. re-allocate it from somewhere else).

While it’s tempting to think that you can get efficiency gains from “lifehacks” and whatnot, if you’ve read this far, the effect of any additional trick is going to be pretty minor; on an absolute basis the amount of your gains might net you 3-5% at best since you’ve probably fixed all the obvious problems.

By far the easiest and most substantial gains to time come from freeing up more time, which basically means saying no — a lot. While it may feel comforting to see a schedule filled with meeting requests and other commitments, remember that all your real work happens in the blank spaces in your calendar.

The first time Bill Gates met Warren Buffett, he described seeing Buffett’s schedule as a revelation: There was almost nothing on it:

Buffett needs time to think, to read, to learn. So the more uncommitted time, the more he spends on learning, thinking etc. Practiced consistently over decades you’d be hard-pressed to find anyone else who spent more hours thinking about investing. Is it really that surprising he’s remained so good for so long?

So we’re back to prioritization, which starts with being clear about your focus.

One tool I’ve found super useful for this comes from the Toyota Production System. For those that aren’t familiar with it, Toyota pioneered the “lean” manufacturing practices which were largely responsible for its emergence from obscurity in post-World War II Japan to the global giant it is today. It is as much a philosophy as it is a set of practices.

One of TPS’ foundational principles is that any effort that isn’t a direct transformation of raw material into a specific car being driven off the lot by a customer is considered muda, or waste. The goal of the system is simply to eliminate all waste.

In this view, there is always some waste (for instance, quality testing is waste, since it isn’t directly transforming the material) — a 100% waste-free state is impossible — but having a clear, specific definition of value (where everything else is waste) is very useful as a compass.

This lens works wonderfully across domains: for software, this means you would only build exactly the features your customers use. All associated work (meetings, bug reports, etc.) is waste and should be eliminated. Filed a bunch of bugs that don’t get fixed? Waste. Fixed a feature that nobody saw? Waste. Design spec for a feature that got cut? Waste. Tested on browser versions that users don’t use? Waste. Waste, waste, waste.

Classifying what is waste, though, requires understanding what you are trying to deliver. What’s your equivalent of a car being driven off the lot? If you don’t manufacture physical items, it’s easy to lose sight of what’s value and what’s waste.

Figure it out, though, and you have a tool to prune away all the non-essential in order to create more of the empty space you need to move your projects forward.

Another useful tool for thinking is inversion. The quote from Jacobi comes via Charlie Munger, Warren Buffett’s partner at Berkshire Hathaway, who and has built a considerable following and reputation for independent thinking
(the volume of his collected wisdom is well worth the investment) — and is where I learned the concept.

The answer, almost always, is at least a few. So: stop doing those things.

It’s a pretty quick exercise and works in every area of life.

For example, here’s ones for this newly resuscitated blog. What are three practices that I would advise if I were trying to make it fizzle out and fail? How about:

And there it is: A short checklist of practices to avoid. It might not make the project a success, but it’s a good guide around the most common sources of failure.

* Credit to “The Ten Commandments for Business Failure” for the title.

One rule of thumb that’s worked well for me over the years is something I call “The rule of three*.” My version of the rule limits my commitments at any one time to three major projects. “Projects” in this case can either be major areas — things like health, family/relationships, a job — or specific major projects or hobbies: moving cities, doing a side business, writing an album, enrolling in a course, serious amateur athletics, etc.

It’s pretty simple math: Each day divides into three eight-hour chunks. For most people it breaks down like this:

What about the weekend? The rule takes this into account (that’s why there’s an asterisk after the three). The full version of the rule allows me to have a fourth project, but it has to be one that can be suspended at any time, indefinitely. The fourth slot is essentially buffer space reserved for when the unanticipated happens: illnesses, family emergencies, surprise commitments (good and bad). While you never know what specific unanticipated thing is going to happen, they happen on such a regular basis (especially if you have kids) that it’s predictable.

But four is the hard limit (and if one of the three projects is especially intense, it almost always takes up that fourth slot.)

If you take on more than four major projects, you inevitably short-change the progress you make in any one area. Worse, if you’re maxed out with zero slack all the time, once the unexpected happens, everything gets thrown into chaos as you try to manage it all. It’s long stretches of these circumstances that increase the risks of serious life impairment — major health issues (e.g. heart attack, nervous breakdown), major relationship issues (e.g. divorce), major reputational crises, etc.

The rule’s usefulness comes when new ideas/opportunities/projects come up. It shifts the question from “Would this be a cool/useful/interesting to do” — the answer is always yes — to “What existing project would I drop for this?”

Because real progress on anything only comes from steady effort over a long period of time (years), it ensures that you will have sufficient resources (cognitive, emotional, time) available to make that investment. More importantly, it buffers you from exigencies that can not only stymie progress, but in a few cases can sideline you permanently.

Three questions One question to ask yourself

When it comes to any sort of creative endeavor, there are three really important factors that matter: there is what your idea/project/startup needs, there’s what you’re capable of, and there’s what you’re willing to do. Of these, only the last one is under your control. To make your idea come to fruition, your job is to get all three of those things to be equal.

When things stall, most people think the gap is between the first two items: between what’s needed and what you’re capable of: Couldn’t raise the round. Nobody wanted to sign you. Music business is dead. Your cofounder left and took half the team with him. Perfectly reasonable, and yet….

Almost without exception the actual gap is between what you’re willing to do and what you’re capable of — and we’re not talking about unethical/illegal things.

The thing you’re making, the company you’re building, the product you’re bringing into the world — it doesn’t matter if your reasons are acceptable, it dies if you can’t keep it alive, whether it’s because you can’t or you won’t.

Your reasons for throwing up your hands are completely valid; nobody gives up on something without giving it their “best” shot. You knew the path to the summit was going to be difficult, but you were prepared for that. Now you turn the bend — and you realize that an avalanche has completely eradicated the path you had planned to take, and a thick fog now completely envelops the mountain. What now?

Option 2: Take a deep breath, and continue trying to pick out a path up the mountain, as best as you can tell, through the fog. It’s uncomfortable, it’s scary, and nobody is going to be able to reassure you that it’s going to work out.

But here’s where you have something that other people don’t. If you believe this thing needs to exist, and that you are tasked with bringing it into the world, then your obligation is to work to rise to the challenge of shepherding it into this world.

In other words, you’re going to need to figure out how to transform yourself into the person the task requires. Sorry, you can’t outsource it. Frodo alone must destroy the ring in the fires of Mt Doom; Samwise Gamgee cannot do it for him.

In mythology, the hero is always confronted with a challenge she must overcome; what makes the hero’s journey compelling is that failure is not only possible but likely. But in today’s world, the consequences of the failing the challenges we’re talking about aren’t fatal, not by a long shot.

The most well-known startup accelerator in the world (perhaps of all time), Y Combinator, has a tagline which I’m sure they use as a reminder/exhortation for many people that pass through their halls: Make Something People Want.

For people starting out to create their first company, project, or creative endeavor it’s simple advice that’s hard to beat. Encoded in that phrase are the concepts of creating something and the perception of value by someone else. It’s also a good phrase to keep around as a way to check on priorities.

I’ve found it useful to augment the phrase to “Make Something People Want (and get it to them at a profit)” in order to add a couple other essential factors (distribution, economic model, costs) in a similarly simple way.

Too often people make something and think the work ends after the object/thing is done. Seth Godin advises checking to make sure your internal case for success doesn’t include the phrase “and then a miracle happens.”

If you’re a product/creative person, this second part is often no fun, but it’s essential — if only to have reasonable expectations. Sometimes miracles do happen, but it’s good to figure out what you’re going to do when they don’t.